There must be very few places where, within easy walking distance, you can enjoy instruments so diverse: one in the style of the north European baroque, another in the style of Cavaillé-Coll, and a brand new four-manual by so renowned an English builder as Kenneth Tickell.

But the colleges of Oxford University provide such a place, and having a BOA student member (Richard Dawson) as Organ Scholar at one of those colleges (Keble) created an opportunity that was simply too good to miss!   So, on one of the sunnier Saturdays of an otherwise rather cold and miserable Spring, BOA members gathered at Peartree park-and-ride (or alighted at Oxford railway station) eager to hear and play these three exceptionally fine instruments – and all so delightfully different!

Our first venue was The Queen’s College chapel and its Frobenius, built in Werkprinzip style under the direction of James Dalton, that was viewed as so ground-breaking when it was installed  here in 1965. 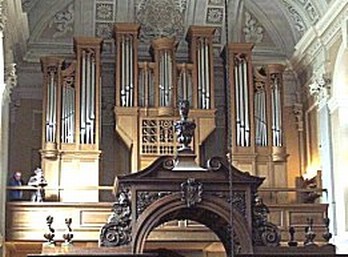 The Frobenius at The Queen's College, Oxford

After dispersing to various local hostelries for lunch, the afternoon session involved visits to Exeter College and Keble College. Timings were made  a little complicated as a result of a commercial recording session in Keble chapel on the same day as our visit, but arrangements had been made to admit us during their "breaks".  David Sanger was consultant when J W Walker installed the Exeter organ in 1994, with the divisions’ headings (Récit Expressif, Grand Orgue) giving an obvious clue to the voicing: the Trompettes and Bombarde are quite devastating!

The new (2011) Tickell organ, in Keble chapel’s generous acoustic, makes a glorious sound – particularly in the hands of our President when a few of us returned there after 5pm for a second session.

Many thanks to Richard Dawson, also to Paul Manley (Queen’s) and George de Voil (Exeter), with whom some of us later had the pleasure of sharing a drink at the historic Turf Tavern.